Teresa Urrea (often referred to as Teresita), also known as Santa Teresa (the “Saint of Cabora”) to the Mayo (October 15, 1873 – January 11, 1906), was a Mexican mystic, folk healer, and revolutionary insurgent.

In the fall of 1889 Urrea had a serious illness and began to experience religious visions. When she recovered she believed she had been given healing powers by the Virgin Mary, and she soon gained a following when 1200 people camped nearby to seek healing and observe miracles. Indigenous people began to call her “The Saint of Cabora”.

She drew criticism from church officials for giving informal sermons in which she drew attention to clerical abuses. It was reported in the church that she was “always friendly with the sick, especially with the poor, without ever getting angry, demonstrating an exemplary humility.” The Mexican press began to cover her activities in December 1889, notably the newspaper El Monitor Republicano of Mexico City.

Urrea predicted an impending flood that would destroy all places except a few she designated. One of the designated places was Jambiobampo, Sonora which was the center of preaching by Damian Quijano, a Mayo inspired by Urrea’s teaching whose father had been a general under Cajemé warring against the Mexicans.

Urrea was venerated as a folk saint among the Yaqui and Mayo peoples, who are indigenous to Sonoran Desert near the United States border. A drought in the states of Chihuahua and Sonora, along with economic and political instability, led the village of Tomochic, Chihuahua to seek her guidance. A violent confrontation occurred there between villagers and government authorities on December 7, 1891. A second village revolt on December 26 routed forty soldiers, and Urrea left the area to avoid being blamed for the incidents. Nonetheless, the government held her responsible and exiled Urrea and her father in May 1892.  They settled in Nogales, Arizona. The Tomochitecos, however, continued their armed resistance against the government in her name. In response, government troops razed Tomochic in October 1892, and 300 villagers had died in the struggle by the end of that year. Some modern sources credit Urrea for the religious fervor with which the outnumbered Tomochitecos resisted government forces. 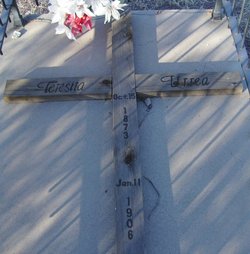 Law enforcement and consular records from the period associate her with revolutionary activities, and the El Paso newspapers reported in January 1897 that the government of Mexico attempted to kill her. She continued to perform reportedly miraculous cures that were widely reported in the press. Promoters induced her to undertake a tour to a number of large cities, including St. Louis and New York, where she entered and won a beauty contest. After discovering that the promoters had unscrupulously been charging those who came to see her, she terminated her contract, returned to Arizona, and eventually settled in Clifton. During these years she had two children of unknown paternity. She died in Clifton in 1906, apparently of consumption, and is buried there beside her father.

What is her legacy? Mostly that of an historical figure.There is one chapel dedicated to her, but as far as I can find out, few invoke her aid in Sonora or Arizona.