The Badlands Guardian (also known as Indian Head) is a geomorphological feature located near Medicine Hat in the south east corner of Alberta, Canada. Viewed from the air, the feature has been said to resemble a human head wearing a full Aboriginal type of headdress, facing directly westward. Additional man-made structures have been said to resemble a pair of earphones worn by the figure.

The apparent earphones are a road and an oil well, which were installed recently and are expected to disappear once the project is abandoned. Its scale is much larger than the figures of Mount Rushmore. 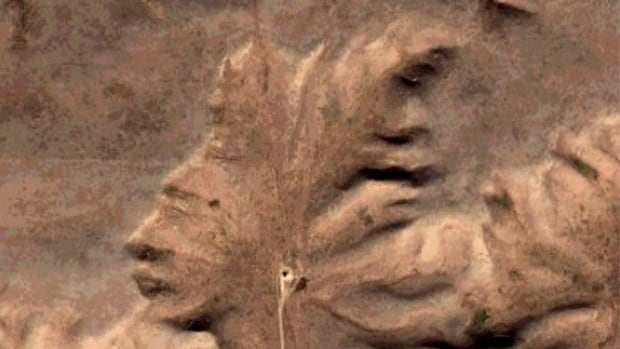 The head is a drainage feature created through erosion of soft, clay-rich soil by the action of wind and water. The arid badlands are typified by infrequent but intense rain-showers, sparse vegetation and soft sediments. The ‘head’ may have been created during a short period of fast erosion immediately following intense rainfall. Although the image appears to be a convex feature, it is actually concave – that is, a valley, which is formed by erosion on a stratum of clay. Even though this area is a natural formation, it is amazingly ironic to see these arid badlands formations resemble the fully detailed shape of the very same indigenous people that lived in these lands.