The Great Serpent Mound is a 1,348-foot (411 m)-long, three-foot-high prehistoric effigy mound on a plateau of the Serpent Mound crater along Ohio Brush Creek in Adams County, Ohio. Maintained within a park by the Ohio History Connection, it has been designated a National Historic Landmark by the United States Department of Interior.

The Serpent Mound of Ohio was first reported from surveys by Ephraim Squire and Edwin Davis in their historic volume Ancient Monuments of the Mississippi Valley, published in 1848 by the newly founded Smithsonian Museum. 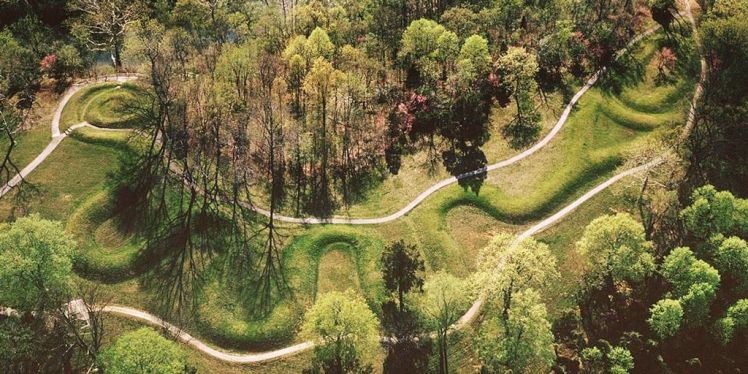 The dating of the design, the original construction, and the identity of the builders of the serpent effigy are three questions still debated in the disciplines of social science, including ethnology, archaeology, and anthropology. In addition, contemporary American Indians have an interest in the site. Several attributions have been entered by academic, philosophic, and Native American concerns regarding all three of these unknown factors of when designed, when built, and by whom.

Recently the dating of the site has been brought into question. While it has long been thought to be an Adena site based on slim evidence, a couple of radiocarbon dates from a small excavation raise the possibility that the mound is no more than a thousand years old. Middle Ohio Valley people of the time were not known for building large earthworks, however; they did display a high regard for snakes as shown by the numerous copper serpentine pieces associated with them. Radiocarbon dating of charcoal discovered within the mound in the 1990s indicated that people worked on the mound circa 1070 AD.