In New Spain, every temple, to be considered a worthy temple of good standard, should have its relics, not one or two, but several, there was the case where the relics were not limited to small fragments, fragments of bones, but whole bodies that, for some miraculous reason, remained uncorrupted, or the chandlers took care to make them appear as such. 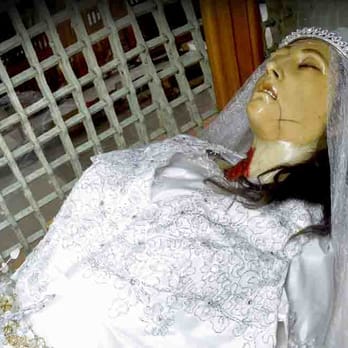 And it happens that, when entering this Santa Teresa la Nueva temple in Mexico City we see that, in the back, that is where the section was reserved for the nuns in cloister could attend the mass without lacking its rule of being isolated from the world, there is a relic that more than surprising is terrifying, it shows us a disembodied body where the bones of a saint Celeste stand out.

A halo of mystery is around this saint, Celeste, in feminine, is said to have lived in Cordoba, Spain and was beheaded, because she had embraced the Catholic religion.