The tomb consists of a traditional Dolores Hidalgo shawl and a gigantic sombrero like the one Jiménez wore in performance, which provides visitors with a shady spot to rest. The entire tomb is covered in colorful mosaic, and if you search carefully you can find small tiles bearing the titles of his songs. It is located in Dolores Hidalgo Municipal Cemetery. 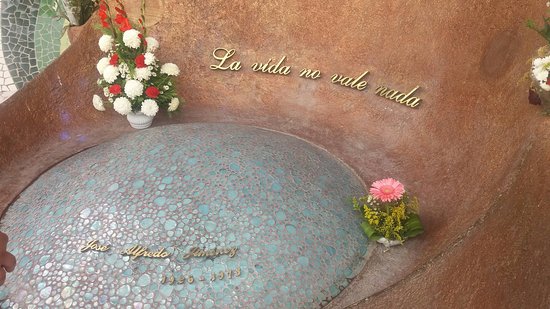 Inside the sombrero tomb an epitaph reads, “La vida no vale nada,” or “Life is worth nothing.” This lyric was addressed to his brother, who had asked him to write a song about their home state of Guanajuato before he was murdered there. The song was a lament on the state of life and death in the province where they were born. However, Guanajuatenses have taken the sad song and reinterpreted it to mean that life in Guanajuato, though occasionally rough, is priceless.

The monument was constructed on November 23, 1998 by architect Javier Senosiain, husband to José Alfredo Jiménez’s daughter, Paloma Jiménez Gálvez. Senosiain has written about his preference for curving design, and how he believes it to be more organic and natural for humans to spend time in. His style, coupled with the rainbow of the mosaic serape makes the grave a cheerful place to remember one of the fathers of Mexican popular music.