El Elegante is the largest crater in the Pinacate volcanic field, 1,400 meters wide and 140 meters deep.

The Pinacate stands out for its unique physical and biological characteristics, the presence of the volcanic shield, as well as the extensive zones of active dunes that surround it and the majority of the Maar crater concentration. The Spanish word mexican pinacate comes from the Nahuatl word for the endemic beetle of the desert, pinacatl.

El Pinacate, declared by the Unesco World Heritage Site, has for decades been a sacred region for different cultures and has been the setting for tests of the NASA Apollo missions.

The product of frequent volcanic eruptions that accumulated lava in compact rocks, volcanic sands and ashes; rocks in which the weathering has produced colorings of special beauty in craters such as El Elegante.

The crater was formed by a violent volcanic eruption when rising magma encountered groundwater, producing highly pressurized steam. This caused large rocks to be projected onto the surrounding land, and smaller fragments to be dispersed widely over what is now the current desert floor. 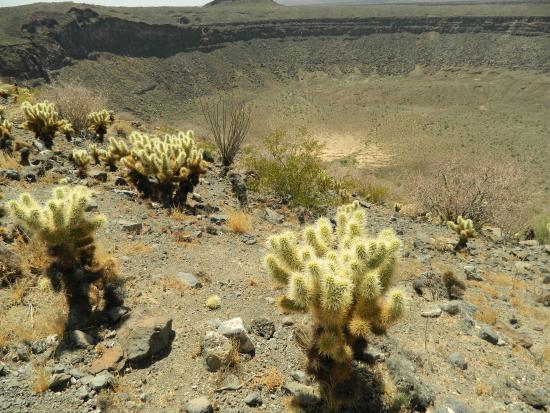 After its eruption, the volcanic cone collapsed back into the earth, leading to the formation of a crater. Signs of this collapse can be seen around the crater rim, where the rock layers are stepped.