In the Guerrero garden in front of the street Av. Universidad is the sculpture of Mr. Juan de Dios Azios Ramírez, better known as “Juan del Jarro” carved in real bronze, by the sculptor Mario Cuevas. 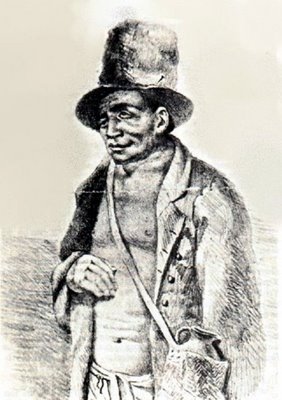 He was a beggar, clairvoyant and popular philosopher, who was recognized for his high human quality towards the other poor and his strange knowledge.

He hated bathing, the month of July and riches. Juan had characteristics that set him apart from any beggar.  He was a pious man who shared his daily earnings with other needy people.

His name was Juan, people called him del Jarro, (John of the Jug) not because he was a banana drunk, but because his only belongings were a hat, a mat and a jug of terracotta, which he always carried on his back.

An opinionated lady was convinced that Juan del Jarro was no more than a charlatan who tricked unbelievers to get rich. When he saw him pass, he said to him, “Tell me, diviner, what will my husband be called?” “You will marry, but not with the father of the child you carry in the womb,” answered the beggar. Shortly after, the decent lady left the city because the family discovered that Juan was right. The legend grew, it was said that Juan could know the future because he heard it in his terracotta jug.

The fame of Juan del Jarro solidified over the years, he was an enlightened madman, he was a clever madman, he was a friend of everyone and he accepted invitations to sumptuous tables as well as to humble kitchens. The people loved him and his fame soon took on a supernatural hue. The day that Juan died, San Luis Potosí paid a lavish homage to the poorest of his illustrious. For one day the classes were forgotten. Singing, wishing eternal rest to don Juan, above all it was recognized that generosity has no class.