In April of 2009, the South Carolina based Malphrus Construction was contracted to send a hi-tech robotic surveillance camera into the sewer pipes beneath Cameron Village in Raleigh, North Carolina. The purpose of this mission was to check the infrastructure of the sewer lines.

Beyond the decaying concrete, sewage and other expected ephemera, their cameras came across a completely unexpected discovery — unidentified, undeniably grotesque, blobs attached to the sewer wall. These creatures are so bizarrely unfathomable that some believe they might well have come from OUT OF THIS WORLD. Locals quickly dubbed the bizarre phenomena “The Cameron Village Sewer Blob.” 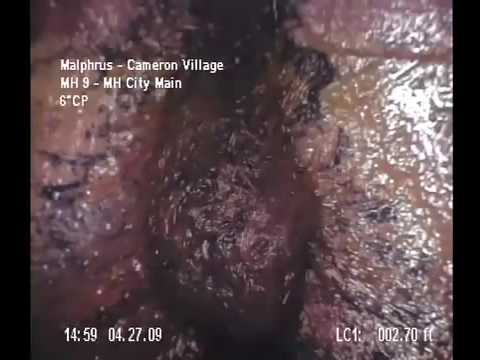 Marti Gibson, the Environmental Coordinator for Public Utilities in the city of Raleigh, North Carolina, claimed to have been as confused as the rest of the world when she first looked at the video. Initially she claimed that the thing was a slime mold that was in the phase of its life-cycle where it looks like a throbbing, breathing animal, but was swift to point out that any water surging by this “slime” would pass through a treatment plant and be thoroughly cleansed. Just a few hours later, Gibson retracted this statement in an email.

Buchan, the environmental coordinator at the Raleigh Public Utilities Department – who was quoted as stating that staff biologists were taken aback by the blob sacs and were at a loss to explain them – has made it clear that he believes that the sewer blobs are actually a colony of Tubifax worms, which had slowly worked their way into weak points in the pipes. Buchan further suggested that these creature’s spontaneous movement was a response to the heat from the robotic camera’s light, but conceded that he did not immediately recognize the creatures.

Investigators have pointed out that there are notable discrepancies in the Tubifax theory. A major one being that there isn’t a single lone worm on or around any of the three sacs in the video. The creatures are complete cysts with smooth surfaces and the blobs shrink back and pulsate as a solitary entity, not as a colony of loose worms.

That having been said, a biology professor with the North Carolina State University, Tom Kwak, told News14 that he didn’t think it was worms, but something else altogether.

Whether these bizarre beasts are aliens, slime mold, worms, sewer mutants or gelatinous radioactive blobs hell-bent on destroying all life on Earth, one thing remains clear — there’s something unknown and very much alive lurking in the sewers of North Carolina…