New Jerusalem, was established in 1973, as a religious enclave within the Municipality of Turicato, Michoacán, to fulfill the vision of an old woman who transmitted orders of the Virgin of the Rosary to the pastor of Puruarán, – according to tradition of the case – to create a Community “protected by the divinity.”

After the foundation of the town, the priest was already known as “Papá Nabor” and the old woman as “Mama Salomé”. Curiously, Papa Nabor sent a message to the people, and quickly would have followers. It is worth mentioning that for such actions, the Catholic Church excommunicated “Papá Nabor”.

The most characteristic thing in the town, would be the way in which its religion would be, in fact, consisted of a regulation based on the church of the community in many prohibitions like reading newspapers, to have computer, to watch television, to listen to radio or music, to organize dances, smoking and drinking alcohol as well as practicing any sport that uses a round ball because, for them, its shape resembles that of the planet and playing with it would be like kicking or hitting the earth, such as football, basketball , Volleyball, etc. 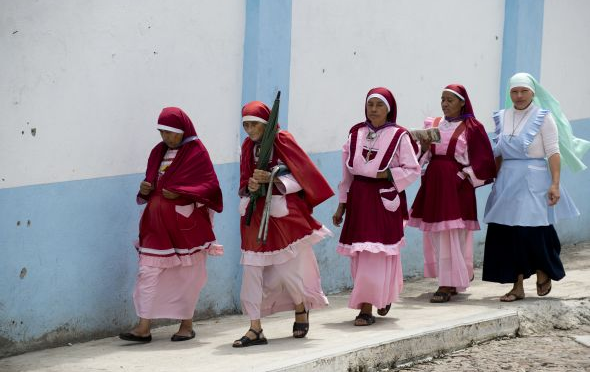 The exception is football, known here as “La Chancla”, because the ball is not circular, but in the form of an ellipsoid. It is also prohibited to have sex or anything else of these, because according to God is to have children.

According to the dress of the town was a very simple thing for the man, because it is not allowed to have long hair, nor to wear earrings because that is for women; But the woman has to dress in the manner of the time of the Blessed Virgin, that is to say, to have a veil on her head, to put on a long skirt capable of covering her feet or simply a robe, not showing the chest or arms. After this regulation, religion was rejected by state, national and international organizations or even by the church in general, because they considered it as a return to pre-conciliar Catholicism.