Mátrix Móvil is a work of the plastic artist Gabriel Orozco, who transformed a gray whale bone structure of 1,966 kilos, into a unique piece of art that has become the icon of the Vasconcelos Library. 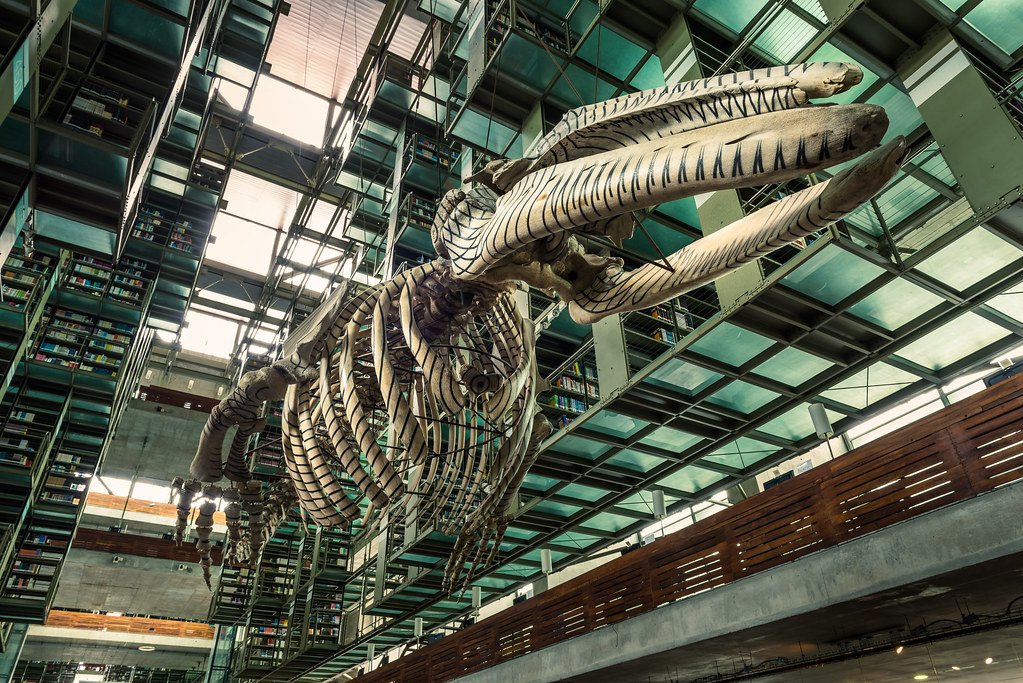 The skeleton measures following its curve 11.69 meters. The drawings that have bones are circles and ellipses made with graphite to dynamize the structure, which resemble the movement of waves and sound waves. The idea of having a great element floating between the books and with its own movement, gave the name of Mátrix Móvil.

Gabriel analysed the structure of the skeleton, getting to know each of its parts, one by one. He took some other pieces, which he brought along with the skeleton, trying out various lines with a pencil. It was not the first time he had drawn on a bony surface, so neither the porosity, the hardness, nor the geometry was alien to him. Given the size of the skeleton, a study also had to be made of the volumes, such as the ribcage and the fins, which the individual pieces were unable to provide. Photographs of other skeletons of the same species, mounted in a way similar to that chosen for Mobile Matrix (Mátrix Móvil), served as a basis to generate other lines, and as those pieces took shape, Gabriel began to work on a vertebra, which also helped him to decide on the thickness of the line finally to be used on the entire whale skeleton. At every stage he took digital photographs, printed out daily so that he could visualise the progress made and the solutions he was finding.

From that moment on until the day before the final installation, volunteers began to join the process unfolding in the great hall of the train station, including the job of drawing with pencils on to the skeleton. It took twelve people working for six weeks using 6,000 pencils. How the piece was to be installed in the José Vasconcelos Library in Mexico City depended on various factors: the many viewpoints from which the public would be able to observe it; the characteristics of the grid formed by the suspended bookshelves; the two stairways connecting the ground floor with the first mezzanine level; and the natural and artificial lighting conditions. The piece was suspended three metres above floor level. The last days of installation were dramatic. We used special wagons to transport sections from the station to the interior of the library, and with scaffolding and winches, suspended it in place in the centre of the great nave. Engineers and workers, librarians and groups of guests invited to the inaugural ceremony approached and stood around us, observing our efforts. Their applause brought us to the final realisation: at 10.30 on 16 May, Mobile Matrix lay there floating in space, still swaying slightly back and forth.