In 2014 was unveiled the statue Guerrero Chimalli, stands in the ridge of the avenue Expansion Bordo de Xochiaca between the River Company and the Tlacaélel park. It was made by the artist Enrique Carbajal “Sebastian” for the municipality of Chimalhuacán.

The Statue measures 60 ms of height, 600 tons of weight, painted in red color and erected on a platform that serves as museum. The statue is the first interactive work of Sebastian and has Mezzanine, lookout and a gallery for exhibitions.

According to its dimensions, the Chimalli Warrior sculpture (regardless of its base) is four meters taller than the (without considering its base) New York City’s Statue of Liberty. Besides, is the largest piece that has made Sebastian.

The statue represents in an abstract way a Mesoamerican warrior carrying a Chimalli. There is controversy for the cost of the work (30 millions of pesos) and also for its geometric artistic style.

Chimalhuacán is one of the municipalities of the State of Mexico with greater concentration of deficiencies. According to the latest figures at the municipal level of the National Council for the Evaluation of Social Policy (Coneval), more than half the population of Chimalhuacán (62.7%) were in poverty in 2010 and 13.7% suffered extreme poverty. 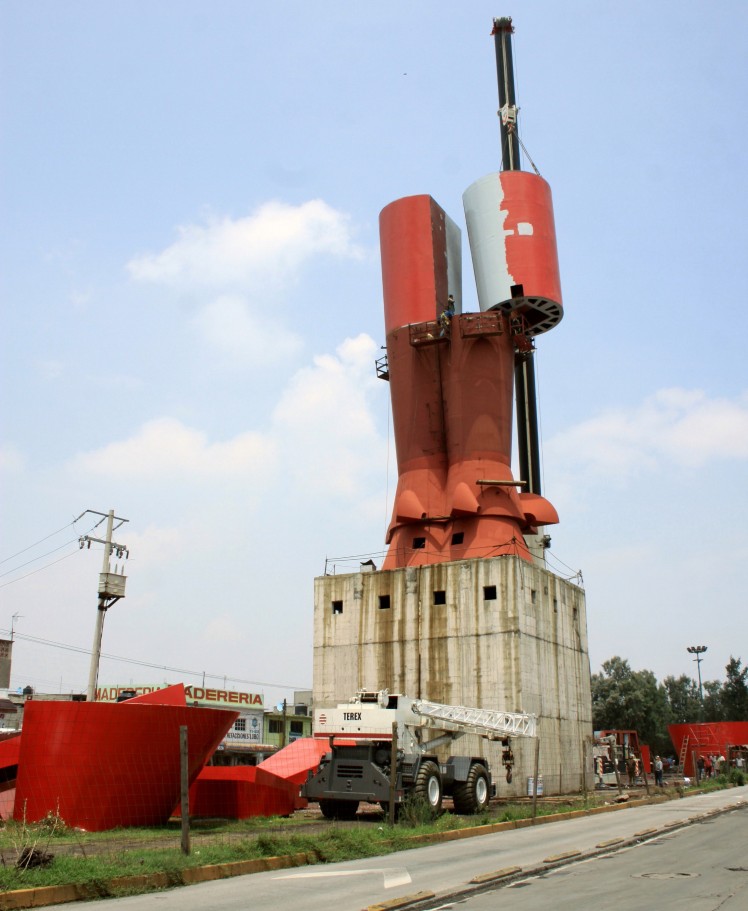 At the inauguration of the monumental warrior in Bordo de Xochiaca, between the limits of Chimalhuacán and Nezahualcóyotl, the mayor of the municipality, Telésforo García Carreón, said that the fact of “beautifying and ennoble the public space with this work” , was an indication that the “basic needs of the inhabitants” were solved. Nevertheless, his sayings contrast with the measurements of poverty for the area and the panorama of humble houses surrounding the work of Sebastian.

About the criticism of this work, inaugurated last Saturday December 13, the sculptor assures that he is already used, because he has done all kinds of works under the controversy. “The Eiffel Tower has a similar story,” he concludes.