The home of the circus king and his wife, a couple from humble mid-western origins, Ca’ d’Zan stands as a testament to the American Dream of the Roaring Twenties. Inspired by and designed in the Venetian Gothic style of the palazzos that ring the Venice canals, this dazzling palatial mansion perfectly captures the splendor and romance of the Italy the Ringlings so loved. To honor its owner, they named it Ca’ d’Zan, “House of John”, in the dialect of their beloved Venice. The Ringlings had been traveling throughout Europe for nearly 25 years, acquiring circus acts and art. They both greatly admired the architectural style of Venice’s Ducal Palace, Ca’ d’Oro and the Grunwald Hotel. When they decided to build a home in Sarasota, Florida, where they had been winter residents for a number of years, The Ringlings took these palazzi as their inspiration – and Sarasota Bay as their Grand Canal.

When John Ringling died in December of 1936 he bequeathed his estate to the people of Florida, but legal wrangling with his creditors went on for a decade until the property finally passed unencumbered to the state. During this time Ca’ d’Zan remained closed. Finally, in 1946 it was reopened to the public. 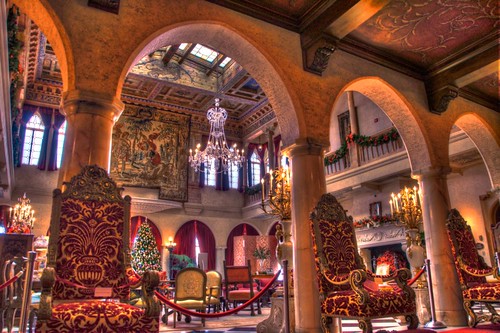 But the care that older buildings require was neglected due to a lack of funds, and by the late 90’s, Ca’ d’Zan was in such a state of disrepair it was used as the location for Miss Havisham’s decrepit mansion in the 1996 Hollywood remake of Charles Dickens’ classic Great Expectations.